In the 1980s, Paul Rozin and colleagues conducted the first laboratory experiments on disgust.  Three decades later, their methods of measuring disgust, which involved self-report (“How disgusted are you?”) and behavioral avoidance tests (“Would you put that in your mouth?”), remain the standard for the field. In the PEEP lab, we are developing new measures of disgust, all of which hinge on the phenomenon of “oculomotor avoidance.” Put simply, people look away from gross things, and you can measure this behavior with an eye tracker. Eye tracking measures of disgust are not only objective, they are also “implicit”: participants are not aware that their eye movements are being used to measure disgust. Usually, we find that oculomotor avoidance tracks self-reported disgust. But we have also identified interesting cases in which the measures decouple. One example is the phenomenon of “rubbernecking.” We recently found that participants actually look more at certain disgusting stimuli on the first few exposures, a phenomenon that does not appear to be reflected in self-report data. Also, we have found that certain interventions (e.g., repeated exposure) reduce self-reported disgust more than oculomotor avoidance, whereas other interventions (e.g., conceptual reorientation) reduce oculomotor avoidance more than self-reported disgust. All of the projects on disgust described below use eye tracking in conjunction with self-report to achieve a more comprehensive assessment of disgust. Also, we recently submitted a review paper on disgust measurement. 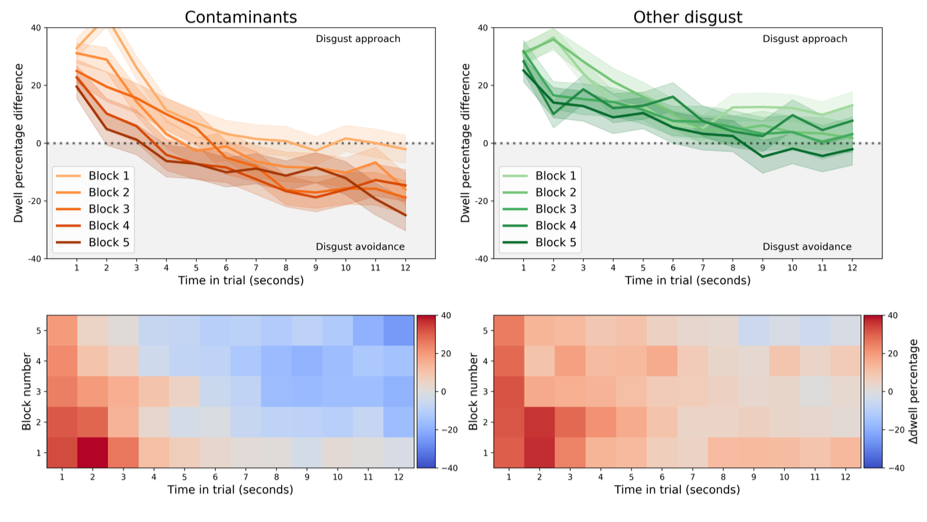 Here is our latest paper on oculomotor avoidance:

One line of research in our lab asks the question, “How do we learn and unlearn disgust?” In one sense, all disgusts are learned. As much as feces, vomit, or gore might seem intrinsically disgusting, we require years of socialization to become disgusted by these stimuli.To the horror of parents around the world, children lack an innate tendency to avoid gross things, in particular, to avoid putting them in their mouths (which is the primary thing disgust keeps us from doing). Anthropologists have found that feral children exhibit virtually no disgust, because there is no one around to teach them which substances are offensive and should not be put in their mouths.

Our research is focused on pinning down one mechanisms by which disgust spreads, associative learning, which can be studied using variants of Pavlov’s classical conditioning procedure. In particular, we are interested in how a trait known as disgust sensitivity, which encompasses how easily one is grossed out, determines how easily one acquires (and how stubbornly one retains) new disgusts. This research has implications for a broad range of important human phenomena, ranging from eating (e.g., intolerance of foods in food neophobia) to discrimination and prejudice (e.g., intolerance of immigrants in xenophobia) to anxiety-related disorders (e.g., intolerance of germs in OCD).

If you would like to know more about this research, check out these papers:

In conducting our research on disgust learning, we stumbled over an interesting finding. With repeated exposure to a disgusting image, participants actually look less and less at the image. This increasing ‘oculomotor avoidance’ (which we measure with an eye tracker) goes against the psychological principle of habituation, which holds that a stimulus should evoke a weaker response as it becomes less novel. Our lab believes in habituation–it’s one of the few law-like principles in the aspiring science of psychology. In fact, you can see habituation at work in much simpler organisms that probably don’t have a psyche (no offense, sea slugs). Thus, we set out to see how many repetitions of a disgusting image it would take to observe the law of habituation. We have now grossed out over 100 participants with a total of over 5000 disgusting image presentations, and we are yet to observe a consistent decline in oculomotor avoidance of disgust! What’s going on? We’re still trying to figure that out, but we think this finding has important implications for understanding disgust and its distinction from other negative emotions, like fear. Also, it might have implications for why exposure therapy is less successful in some patients with disgust-based aversions. Finally, we might need to rethink our understanding of oculomotor avoidance. Perhaps it’s not a passive response, but instead an instrumental behavior, and thus it might not undergo habituation. We have spent more than a few lab meetings reading Mark Bouton’s incredible book Learning and Behavior: A Contemporary Synthesis searching for answers… 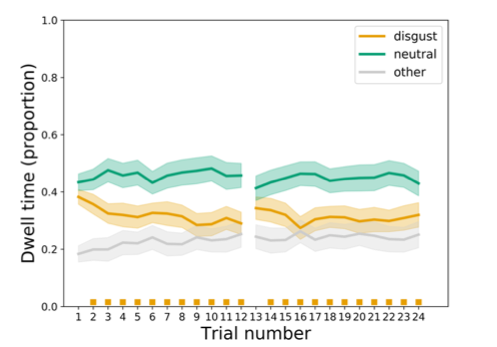 Disgust likely evolved to promote pathogen avoidance, but human cultures have repurposed this peculiar emotion to serve other functions. One troubling aspect of disgust is its role in prejudice and discrimination. Dominant groups often project disgusting properties onto marginalized outgroups in order to dehumanize their members and justify their mistreatment. Anti-Semitism, racism, homophobia, transphobia, and xenophobia have all been characterized by the rhetoric of disgust.

Rachel Leiter, a PEEP lab member interested in special education, has focused on the role of disgust in ableism or disability prejudice. Drawing on the interdisciplinary program of disability studies, she is exploring stereotypes and prejudice towards individuals with intellectual disability using eye tracking.

This line of research explores strategies for reducing disgust. One insight comes from recent work on disgust and competing motivational states. A few studies have shown that biological drives, such as hunger and lust, can help us overcome disgust and approach stimuli that we would normally avoid due to pathogen concerns. Do monetary rewards for approach behavior provide similar reductions in disgust? The answer may be “yes,” according to PEEP lab member Alex Lee’s recent thesis. Rewarding approach behavior dramatically reversed oculomotor avoidance. Do these rewards have lasting effects? Unfortunately, not yet. Alex found that after the rewards ended, participants went right back to avoiding looking at a disgusting image. Perhaps more trials are necessary for habit formation.

In addition to operant conditioning, we are also trying a strategy known as conceptual reorientation, in which participants radically rethink the nature of a stimulus. PEEP lab members Kari Hampson and Owen Crabtree have taken the lead on this project, and their pilot data suggest that this strategy may actually work at reducing oculomotor avoidance. We will know for sure when we finish this pre-registered study: https://osf.io/j5sfd/

It’s rude to talk about gross things at the dinner table. One reason for this convention is that disgust inhibits appetite. Indeed, some believe “oral inhibition” is the core of disgust and a necessary condition for experiencing the emotion. Disgust may also inhibit sexual arousal, which may provide insight into certain sexual dysfunction related to low arousal.

The PEEP lab is beginning to investigate the relations between disgust and appetitive drives, and will soon analyze data from a pre-registered study of disgust and visual processing of food cues. Zoe Brown plans to study the relation between disgust and sexual arousal in her thesis project, which was inspired by the pioneering work of Drs. Charmaine Borg and Peter de Jong.

We are also interested in fear learning. Mira Engel, PEEP lab member, just validated a new eye tracking measure of conditioned fear responding in her thesis. She found that participants continue to monitor conditioned fear stimuli after an extinction procedure, despite reductions in conditioned fear on self-report measures.

In addition, we are interested in reward processing. Eye tracking may provide a useful measure of anhedonia, which refers to the loss of sensitivity to reward in depression. We are examining dwell time on pleasant images as a transdiagnostic marker of anhedonia in a large patient sample through our collaboration with McLean Hospital.