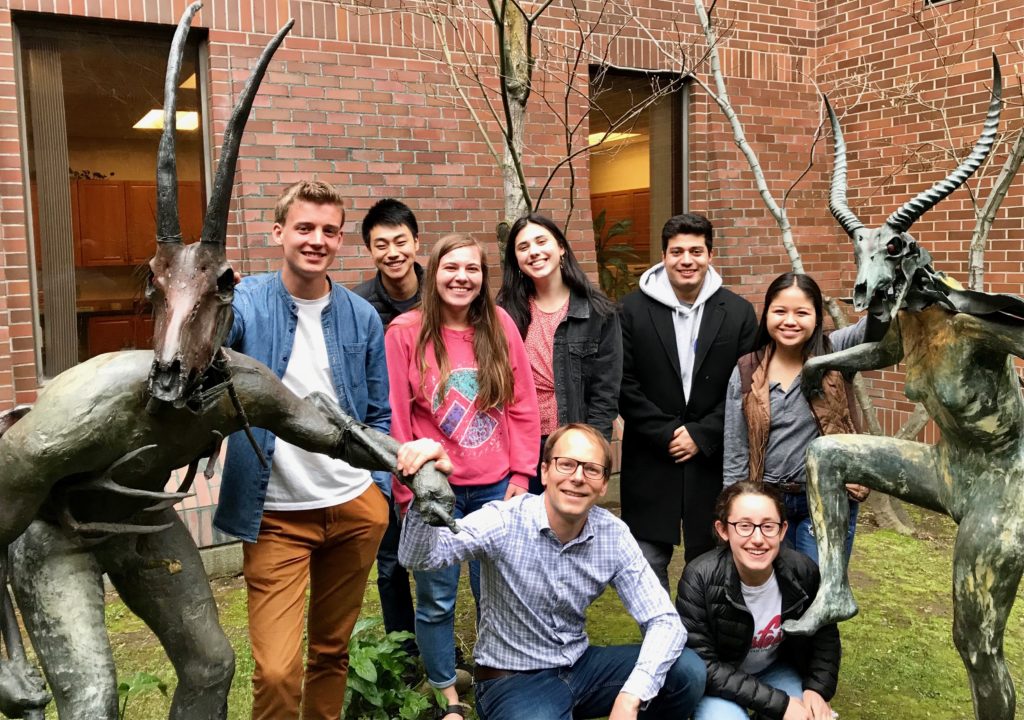 Tom earned his doctorate in Clinical Psychology at Vanderbilt University and completed his internship training at McLean Hospital, Harvard Medical school. He joined the faculty of Whitman’s Psychology Department in 2014. Tom’s interest in disgust was inspired by his graduate mentor, Bunmi Olatunji. His approach to faculty-student collaborative research was inspired by his undergraduate mentors at Lewis & Clark College. In addition to his work at Whitman, Tom provides therapy to community members who lack access to evidence-based treatment for anxiety disorders.

Siri is a sophomore intended psychology and philosophy major. Her interests include child development, gender development, and disgust as it relates to anxiety disorders. Outside of the lab, Siri enjoys being a part of Whitman Glean Team leadership, working as a sexual violence prevention intern, and drinking lots of coffee.

Daniel is a sophomore intended psychology major. He’s interested in researching mental health issues in Asia and previously worked in a lab studying autism. Other than psychology, Daniel enjoys exercise and plays tenor saxophone in the Whitman College Jazz ensemble

Zoe Brown is a sophomore intended psychology major. She is interested in abnormal psychology, social psychology, and how psychology interacts with the political system. Besides working in the PEEP Lab, Zoe enjoys biking, reading, and spending time with her cat.

Gökay is a senior Psychology major with a background in product design and affective computing. He is interested in improving people’s lives through products that deliver treatment and coaching in conjunction with wearable measures of emotion.

Nikki is a junior psychology major with an intended chemistry minor. She is interested in abnormal psychology, social psychology, and neuropsychology. Outside of the lab, Nikki enjoys working as a Resident Assistant (RA), being part of Pre-Health Society, and bullet journaling.

Sara is a junior psychology major with a history minor. She is particularly interested in abnormal psychology, language acquisition, and learning theory. Outside of the lab, she enjoys cooking, participating in the Whitman Glean Team, and working behind the circulation desk of the Penrose Library.

Omar is junior Biophysics, Biochemistry, and Molecular Biology major who is interested in neuroscience and psychiatry. He performs in the Whitman Orchestra and Chamber Choir and volunteers at the Crisis Text Line.

Kari Hampson studied conceptual reorientation and disgust for her thesis. Outside of the lab, Kari enjoyed being a part of Whitman GlobeMed leadership, road biking, and attempting to Facetime her dog.  She is now completing the Critical Language Scholarship Program in South Korea.

Owen studied conceptual reorientation and disgust in the PEEP lab. He is now working with visually impaired students near Boston as he prepares for a career in clinical psychology. He likes to play the piano, write creatively, and play tennis.

Leah Shaffner did a thesis study on the role of disgust in ableism.  While at Whitman, she volunteered with Special Olympics, ran the Buddy Program and played tennis.

Katie Davie is a senior Psychology major with an intended Music minor. She is particularly interested in Abnormal Psychology, stigma, the criminal justice system, and how these three topics overlap. When she is not in the lab she enjoys playing piano, reading in parks, and striving to bake the perfect loaf of banana bread.

Shannon completed her undergraduate degree at Whitman College in 2015 and am currently working as a research coordinator with Dr. Matthew Mosconi at the University of Kansas. She joined the University of Kansas Clinical Child Psychology Program in the fall of 2017. Her research interests focus on cognitive and brain development in individuals with autism spectrum disorder. She is particularly interested in exploring developmental differences in ASD through the eye movement and functional neuroimaging studies in order to learn about discrete brain mechanisms involved in this disorder.

After graduating from Whitman in 2016, I worked as a research assistant at University of Oregon’s Prevention Science Institute in Portland, Oregon, I am now entering the Ph.D. program in counseling psychology at the University of Oregon, with a research focus on prejudice and health. I absolutely loved working in the PEEP lab. Participating in engrossing and active discussions every lab meeting was a highlight of my college career and my experience here gave me invaluable skills that allowed me to secure successful post-grad research positions.

Haley graduated from Whitman College in 2016 with a psychology major and a theater minor. Here is a dispatch from her adventures in the real world: “Since graduating, I have had a series of bizarre and seemingly unrelated experiences, including spending the summer living in a barn in Maine; landing a job driving trucks, digging ditches, fixing faucets, and relocating to an office to become a “desk plumber.” My studies in psychology and disgust research have consistently proved relevant and illuminating in each of these circumstances- though I am still pretty unclear as to why I find kitchen waste so much more vile than sewage. Maybe the PEEP lab will find an answer to that one one day!”

Brianna ’16 is currently writing her dissertation on the influence of rape myths on misconceptions of the perpetrator for her MSc in clinical criminology at the University of Leicester in Leicester, England. She’s also a member of the Leicester City women’s soccer team. She hopes to work in law enforcement as a detective.

Hannah is interested in studying objectification theory, emotion regulation strategies, and how socio-economic status impacts levels of childhood depression and anxiety. In my spare time, she enjoys photography, playing the Sims, crafting, and trying new restaurants with friends. She is now preparing to pursue a Ph.D. in clinical psychology.

Trevor is interested in the psychology of decision making. He hopes to be able to combine an understanding of psychology and economics to better inform policy decisions. After graduating from Whitman, he worked at the Border Policy Research Institute in Bellingham, WA on a project analyzing transportation and trade data in order to determine which ports of entry require more infrastructure spending. He is now enrolled in a Master’s in public administration program at the University of Washington.

Anneka Sonstroem majored in biochemistry and psychology major and is currently preparing for a career in neuroscience. Her research interests include the effects of dopamine on human motivation and behavior. When she’s not in the lab, Anneka enjoys sewing, running, and baking.

Rachel Leiter is interested in educational psychology and disability studies. She started the PEEP lab’s line of research on disgust and ableism. She plans to pursue a career in special education and work with people with disabilities in underserved communities. Rachel was recently accepted into the Master’s program in special education at Columbia University.

Alex is interested in research related to culture and its impact on cognition. Specifically, he focuses on how differences between Eastern and Western culture lead to differences in somatization and expression of mental illness. Interests outside the lab include swimming, piano, cooking, and teaching. He is now working in the Japan Exchange and Teaching program.

Mira majored in psychology and completed her senior thesis on attentional bias toward threat stimuli during fear conditioning. She hopes to attend graduate school in clinical psychology. She became interested in psychology during her first year at Whitman when she took an introductory class and learned more about learning theory and conditioning paradigms. Growing up, she trained and showed dogs using positive reinforcement and a “clicker,” which gave her first hand experience in how effective both operant and classical conditioning are in changing behavior.